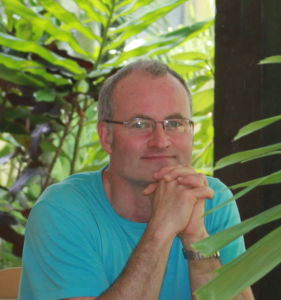 The son of two ex-patriot Yorkshire folk,  Tim grew up in a village in
Berkshire. He first attempted writing as a guitarist in a teenage heavy rock band.  Whether or not Tim’s efforts as a song-writer were contributory to the band’s subsequent collapse will never be known, but as a student in the Biochemistry Department of Liverpool University he continued composing his protest rants against the Thatcherite ethos of the 1980s. His hoarse vocals and plonking Billy-Bragg-ish guitar busking style became a familiar sound along Bold Street on Saturday afternoons.  At this time he started reading the Liverpool Poets and listening to punk and dub performance poets that often supported bands and played in the Student Union bars.

Two years of suffering in a stockbroker’s office in the City of London convinced him that a respectable career path would be un-navigable, so equipped with not much more than a pair of binoculars and a sleeping bag he embarked on a year-long exploration of the wildernesses of Asia and Australia.  Returning to Britain in 1990 and dedicated now  to protecting what remains of the earth’s ravaged ecosystems, he passed two years in a frenzy of activity based in Edinburgh, doing paid and unpaid conservation work all over Scotland.  While leading a group of volunteer’s on a footpath maintenance project on the East Lothian coast, he met his life-long partner and inspiration, the artist Robbie Burns.

A placement with the National Trust, writing interpretative material on the wildlife of Fountains Abbey estate, brought him back to his Yorkshire roots, and he has lived in Harrogate ever since. It was here that he hung up his guitar, stopped trying to think up tunes for his songs and began to call them poems. Professionally he moved from conservation into horticulture, and for the past 10 years he has been running his own gardening business, Dragon Garden Services.  During winter months when business is slow he likes to travel abroad on birdwatching trips with Robbie, and together they have investigated Greece, Turkey, Spain, Morocco, India, Australia, Canada, and made numerous journeys around Central and South America.

As a poet he divides his talents equally between page and stage. His first book was a collection of forty sonnets around a theme of birds called Birds of the World in Colour, published by Flarestack in 2003. His poems have appeared in many magazines including The Dalesman, Orbis and the Poetry Society’s Poetry News. He has won prizes in the Kent & Sussex and Nothampton Literature Group competitions, and was once long-listed for the Bridport Prize.

On the performance side, he is a well known face at slams and Open Mics throughout the North of England.  He is a previous winner of the Ilkley Literature Festival Open Mic Competition, and was a contestant in the BBC Radio 4 National Poetry Slam in 2009. Also in 2009 he wrote, produced, directed and performed a one-man show,  Gringo on the Chickenbus, at the Ilkley Literature Festival Fringe. In March 2011 he won the First York Poetry Slam and and First Prize in the 2011 Huddersfield Literature Festival Grist competition. He can occasionally be found at poetry events in York including The Spoken Word at the Exhibition Hotel, but his principal haunts are Poetry Prose and Pints at the Tap & Spile pub in Harrogate,  and Wicked Words in Chapel Allerton, Leeds, where he has long been regarded a part of the furniture.