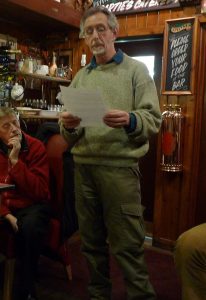 John Walford was born in Anlaby to the west of Hull, that city north of
the Humber which once boasted the only independent telephone exchange in Great Britain. After confounding his teachers by passing the 11+ and going on to Grammar School he had a plethora of jobs before he finally settled on a career as an accountant with Reckitts Colours. Historically Reckitts is especially famous for its Dolly-Blues used before washing powders to keep white cotton from going yellow. It is still available today.

During this time he married, acquiring two step-children, who had a Greek father, thus beginning his acquaintance with Greece.

After leaving Reckitts, John again cycled through a number of jobs before becoming a conductor for Northern Rail.

In, 2005the muse struck, and John started writing and joined the Skipton Writers group. However, John was no stranger to publishing: for many years John has been a member of the Friends of the Earth and he took on the new identity of Wally, a cartoonist,  poking gentle fun at those who loved the outdoors. A book of Wally’s cartoons was published in 1998 (A few copies are still available).

John has traveled a great deal, and many of his stories record his impressions of the vicissitudes of life in many cultures, including, as you might expect, life in the Hellenic Republic. He also has a keen interest in butterflies and plans to use his time on retirement to travel throughout the world on long butterfly expeditions. We look forward to reading of his experiences in the far flung corners of the earth.