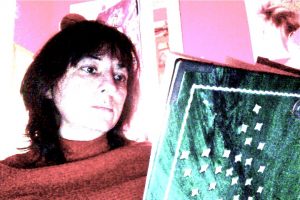 Amina Alyal has not always lived in this century.  She finds it much the same as the last one she was in, however, only with better technology and more fantasy films. Contrary to popular belief she doesn’t think metaculturism was a mistake, and is herself a metaculturist, a multicolourist, and a metafictionalist.  One of her favourite books is Ovid’s Metamorphoses, although she is also well versed in Middle Earth and thinks Peter Jackson is a total dreamboat.  Metaphorically speaking.  But she understands that you can’t live entirely in fantasy worlds, and so her writing is both fanciful and rooted in solid ground.

Amina has spent much of her life reading poetry and growing plants.  She doesn’t have as many hours as she wants for either, but still finds both sustaining.  She likes to watch roses growing, jasmine climbing, irises popping out their sharp tips of colour from the darkness of leaves and earth.  Then maybe it’s time for a dose of Alice Oswald, Wallace Stevens or Walter de la Mare.  Taken with green tea and a big slice of imagination, she says, they really can’t be topped.  She would very much like to do this inside one of those landscapes you can see in a Persian miniature, all herbs and hills and trees and turf, perhaps the one where Rustum dozes on a stripy mat, while his horse heroically wrestles with a lion in the margins.  Her inspirations are often from art, or archaeology, from all round the world and all over the centuries.  Other than this mansions, moors, music and memories all go into the mix.  So long as it can be caught and turned about in the alembic of words, anything, she believes, can graft onto anything and grow new forms.

Surprising though it may seem, she is in fact a doctor, but her surgical skills are really terrible and she doesn’t inspire confidence if asked to diagnose a disease.  She isn’t actually allowed to write prescriptions.  Temperamentally a night owl, by day she frequents the groves of academe, where literature and creative writing are her specialties. She works with students and colleagues mainly on poetry, drama, performance and rhetoric, and she sowed the seed that blossomed into Wordspace - the open mic, imprint and radio station attached to Leeds Trinity University.  Her public workshops are sought after, and she doesn’t half put a lovely gloss on Rumi, Petrarch, and the Metaphysical Poets.

Amina has published widely, in academic publications and in journals and anthologies including Dream Catcher, Envoi, Iota, the Aesthetica Creative Writing Annual and Heavenly Bodies (Beautiful Dragons Press, 2014).  She spent about three years recently working on tanka poems with Oz Hardwick, M. Graham, and the taiko drumming group Kaminari UK  – a venture that became a series of shows, a book called Close as Second Skins (Indigo Dreams Press, 2015; shortlisted for the 2015 Saboteur Award for best collaborative work) and a CD called On an Eastern Breeze (Catchment Recordings, 2014).  The Ordinariness of Parrots is her first collection.

Amina is the Editor for Dream Catcher 41. She is also a joint editor for Geography is Irrelevant and Words from a Distance.