Over the years, Rose has wearied of receiving manuscript after manuscript, the protagonist almost always a male. When she protests, the writer is likely to exclaim, “But his best friend is a woman! She’s the smart one!” Yeh, and the world you’ve created is seen from the male POV. If the female side characters are so crucial, so integral to the story, why not tell the tale from their point of view?

And so we shall.

Stairwell already publishes books from LGBTQ writers, from male, female and we have some non-binary writers in the pipeline, but this is our first foray into focusing on the work of female and female-identifying authors for a whole year. Due to previous commitments 2020 was the first year this scheme could most easily come together.

2020 is also  an anniversary year: the centennial of American women achieving suffrage. 1920 was the year that enough (not all!) US States finally ratified the 19th Amendment, allowing women the vote. The Amendment guarantees “The right of citizens of the United States to vote shall not be denied or abridged by the United States or by any State on account of sex.” It was signed by President Teddy Roosevelt on the 19th of May, 1919.

It would take 15 months to convince the final necessary state, Tennessee, to ratify the Amendment, thus surpassing the required hurdle of being approved by “the legislatures of three-fourths of the several States.” Fortunately, Alan was more readily convinced we needed a femme-only year.

We have: a poetry collection co-authored by the amazing Izzy Jones, Alice Tomlinson and Becca Miles; a scary new novel (with that all-important dash of hope) on climate change, by Eliza Mood; a Young Adult novel by Yvonne Hendrie set in Scotland, where fae folk and humans interact; and the second part of The Blood Gift Trilogy by Susie Williamson. Susie’s first instalment, The Return of the Mantra, has received praise, reviews and orders from the US as well as across the UK. We have poetry  from Rosemary Palmeira, and others. Plus of course, we can cheekily include Dream Catcher in this mission since the editor is the brilliant Wendy Pratt.

Image of the 19 Amendment 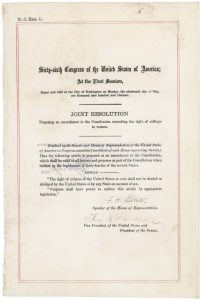 “This work is in the public domain in the United States because it is a work prepared by an officer or employee of the United States Government as part of that person’s official duties under the terms of Title 17, Chapter 1, Section 105 of the US Code.”