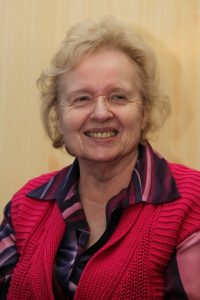 Patricia Riley's love of theatre was instilled in her from an early age. She has vivid memories of discovering the beauty of language by being taken regularly by her father to the then Shakespeare Memorial Theatre from the age of eight. Both her parents were keen on classical music. Pat was also brought up on the works of Gilbert & Sullivan as her mother sang several of the principal mezzo-soprano roles in amateur productions of these operas.

When just out of her teens, Pat was elected Secretary of a newly formed Community Association in the Gloucestershire village where she lived. With others she started a drama group there and she met her husband, a fellow actor, through the amateur theatre. As an adult she obtained degrees in Law, Social Science and a Masters Degree in Management, and pursued a successful senior managerial career in local government and the voluntary sector.

On retirement in her early 60s Pat obtained a BA in Theatre Studies from Rose Bruford College. It was during her work for this qualification that she first came across the plays of early 20th century feminist playwright and children’s author Githa Sowerby and, finding that little was known about her, she began researching her life.

Now in their 70s, Pat and her husband continue their involvement in the amateur theatre, writing, acting and directing, and both work voluntarily for the Wharfedale Festival of Theatre. They have three sons, seven grand-children, and two great-grandchildren.

This album on VIMEO was made at the Mint Theatre in New York when they presented for the second time in 2012 (the first was in 2001) Githa Sowerby's play Rutherford and Son.

The album consists of 7 videos of Pat Riley talking to the audience at one of these performances. The Mint Theater Company specialises in " finding and producing worthwhile plays from the past that have been lost or forgotten. It is our mission to create new life for these plays through research, dramaturgy, production, publication, readings and a variety of enrichment programs. " from minttheater.org/about.