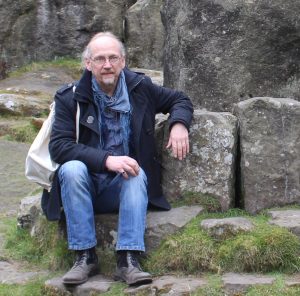 Oz Hardwick has always heard voices. His grandfather’s spirited recitations of Burns and the Lake Poets provided his introduction to poetry, but a darker chorus also informed his linguistic growth. He has clear childhood memories of cowering under his bed covers, eyes screwed tight, as disembodied voices spoke to him. As time went on, he became used to them, and even learnt to exert a certain amount of control over them. It would, however, be years before he realised that this was the auditory equivalent of seeing faces in random patterns. To this day, he carries a notebook in which he scrawls fragments of phrases heard in passing traffic, departing trains, or the electric hum in shops and offices, and he is currently fascinated by the language of damp plaster.

For Oz, words provide just one medium within his ongoing creative journey. Growing up in a household which included his grandfather – an autodidact and amateur poet, folk musician and artist – had a profound effect on Oz, which in many ways crystallised when he discovered Hawkwind in the early 70s. Although their blend of otherworldly sonic textures, captivating visuals and enigmatic spoken word ostensibly had little to do with folk songs, Robert Burns and pencil portraits, he recognised intuitively the connections between art forms, and immediately set about forming an unlistenable band, penning bad lyrics and poems, and producing execrable artwork. Although he shortly afterwards swapped the paintbrush for the camera, the following 40 years have pretty much been an attempt to realise those early visions. Amongst the vast and diverse results thus far are five solo poetry collections (most recently The Ringmaster’s Apprentice (Valley Press, 2014)), a Saboteur-shortlisted co-written pamphlet (with Amina Alyal, Close as Second Skins (IDP, 2015)), and a number of edited anthologies, including New Crops from Old Fields (Stairwell, 2015). He has designed the covers of most of these, and some have been set to music…

Because poets make no money, yet have to eat, Oz is an English Professor, and has published widely on medieval art and literature, particularly on animal iconography and misericords. This interest has, of course, coloured a lot of his poetry: My brain’s like marbled oils on glass, says Oz, nothing is still or discrete – everything swirls around everything else, interacting with it, changing its nature. And light shines through it all …

Oz is the editor of New Crops from Old Fields