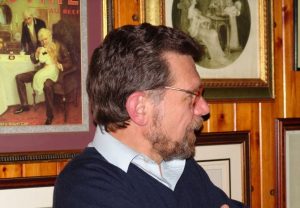 N.E.David is the pen name of York writer Nick David.

Nick was born in London in 1950 but went to school in the West Country. His worst mark at ‘O’ level was in English Literature and any suggestion that he would eventually become a published author would have been greeted with surprise if not derision. He studied Engineering at University but in the space between exams and the end of term and during the long vacations he read avidly, discovering the American authors of the 1930s such as Hemingway, Faulkner and Fitzgerald. Suitably inspired, he took a bed-sit in Leeds and supporting himself with a series of part-time jobs, he wrote two novels, neither of which was successful.

Following this disappointment he was forced to pursue a more conventional career, firstly in industry and more recently in personal finance. 30 years later, with a lifetime of normal experiences behind him, he is now able to approach things from a different perspective.

In 2005, Nick started writing again, producing a collection of short stories. Two of these were published, Hurrah for Captain Spalding! appearing in Scribble magazine and Swan Lake which achieved Highly Commended at the Wolds Words Festival. He then began attending The Spoken Word open mic in York where he received the encouragement to try his hand at longer works. He has since produced three short novellas, Carol’s Christmas,Feria and A Day At The Races all of which have been published by Stairwell Books. He is now rediscovering his writing later in life and his debut novel, Birds of the Nile, has recently been published by Roundfire.

Nick writes character-based accessible literary fiction where he focuses on stories of human interest. He does it because it helps him make sense of his life and because he has things in his head he is driven to get down on paper. If he can make these resonate with the reading public, so much the better. He has no overt personal or political message to convey but his initial objective is to entertain the reader and he hopes this is reflected in his writing.

Besides being a regular contributor to Literary Festivals and open mics in the North East Region, Nick is also a founder member of York Authors and co-presenter of Book Talk on BBC Radio York.