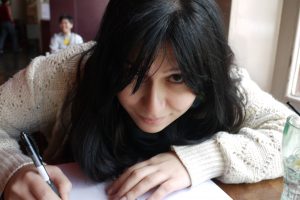 Andrea is a Londoner, born and bred, which means that she enjoys the anonymity of big cities, and avoids making eye contact on public transport. She writes under the pen name A.L. Michael.

Andrea decided to become a writer at age eleven, after the whole ‘secret agent thing’ fell through. She gained both a BA in English Literature with Creative Writing and an MA in Creative Entrepreneurship (equipping artists with business skills) from the University of East Anglia. She is currently working towards an MSc in Creative Writing for Therapeutic Purposes.

Andrea has had various stories and articles published in magazines and on websites, including The Film Pilgrim, Fire Anthology, NAWE’s Myths of the Near Future and is a features writer for the popular Pop Culture Play Pen. She was winner of Cape Farewell’s Climate Writing competition for The Eden Project, and the Mooky Chick Feminist Flash Fiction Award.

She is also the creator of Cafe Disaster, a comedy blog from the perspective of an overworked, underpaid barista with rage issues. That barista is in no way based on her. Not at all.

Andrea currently runs her own company, The DumbSaint Project, providing creative writing workshops for children, teenagers and adults. The company is named for, and based upon the principles of, Jack Kerouac’s Belief and Techniques for Modern Prose. Which mainly equates to ‘stop worrying if you’re good enough and enjoy it.’ She’s also a bit of a Beat freak.

In the summer, Andrea travels around festivals setting up creative workshops, not quite in a VW campervan just yet, but that’s the dream.

Her writing seeks to understand happiness, and why humans seem to mess it up so often and so easily. She likes love stories without sentimentality, and exploring themes of isolation and belonging, which is why London features so frequently as a backdrop to her work. Her first novel Wine Dark, Sea Blue is influenced by her Greek Cypriot heritage and a desire to explore how identity is formed and destroyed.

She is currently working on her third novel.  You can find out more about Andrea at www.almichael.com and about Wine Dark, Sea Blue at www.winedarkseablue.com