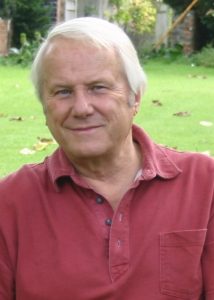 Late Flowering is a dramatic collection of poems and drawings by lecturer
and artist Michael Hildred, who grew up in Selby during the war, sang in the Abbey choir, experienced first hand the Selby floods of 1947 and made a name for himself for his significant contributions to art education while Head of Art and Design in a large community comprehensive school in Sheffield.

With a striking speaking voice, Michael was always in great demand as actor and performer in the thriving amateur dramatic and operatic scene in Sheffield, with roles ranging from Shakespeare and light comedy to the male lead in Annie Get Your Gun, on the stage of the Lyceum Theatre. Throughout the years spent in Sheffield, Michael exhibited his paintings. He considered it fortunate to be able to bring up his children in the idyllic surrounding of the village of Baslow on the edge of Chatsworth Park, in the beautiful Derbyshire Dales.

After 10 years, his professional record led to an appointment as lecturer in the Department of Aesthetic Studies at Moray House College of Education, on the Royal Mile in Edinburgh; a short walk from Holyrood House. For 20 years he and his family lived on the northern edge of the City, not far from the world-famous Forth Rail Bridge. Michael’s job involved visiting every kind of education establishment, not only in the City itself but also down to the Borders, up to Stirling and across to Glasgow. Inter-college activity took him further north to Dundee and Aberdeen, and south to Leeds, Leicester, Birmingham and Bath. His college work centred upon training students to teach art at all levels but specializing in secondary education with graduates from colleges of art from all over the UK, particularly from Scotland.

Michael contributed an art dimension to interdisciplinary courses at Glenmore Lodge, the Mountain Rescue Centre in the Cairngorms, alongside mountaineers and river-sports experts based at the Lodge, and scientists from Moray House. An enduring love of Scotland took root over these years.