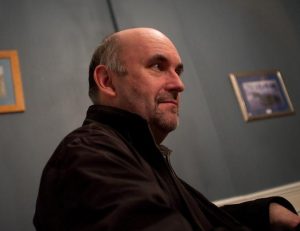 Andrew is a Southerner who spent most of his first twenty years in the London Overspill fringes of working-class Essex, talking estuary English and breathing in cement dust.  But his father was a vicar, and his brothers went to a minor public school - so there was a certain poshness to be breathed in too.  His own career as an educational refusnik in the local ‘comp’ is best forgotten, (’cept it provided him with a few funny stories about truancy).  Thus marginalised, and with hardly an exam to his name, he began working with others on the edge - in children’s homes in London and with Polish concentration camp survivors in Suffolk.

This period living in the country was hugely influential.  As a vicar’s son he had access to a wide social range: the Polish refugees and the army of international volunteers who worked at Sue Ryder Foundation headquarters broadened his outlook.  He cycled everywhere, became super-fit, read widely and made relationships - meeting his wife to be when she was a volunteer at Sue Ryder’s.

House prices forced them North, and their married days were spent living in Harrogate.  Eastern Europe beckoned once more in the mid-90s with another stint working for Sue Ryder’s in Prague.  For many years he worked for the Leonard Cheshire Foundation outside Harrogate and in various residential and old people’s homes before joining the Multiple Sclerosis Society at a respite home in York.

Writing came early (his most ancient poem dates from 1968) - writing that often illustrated the struggle of individuals against systems - people who went under - others who came away with a quirky victory. Work has been influential too, with the ability to empathise with a range of characters and tell their stories from the inside.

Having written poetry on and off for many years without ever publicising the fact, in 2005 he joined various classes and writing groups in Harrogate and York and finally made a public appearance in 2006.  In 2008 work with a group in Harrogate led to the co-writing of Stray Ghosts, a book of Harrogate ghost stories.  This led to a new emphasis on prose and membership of Deepdale Creative Writers brought the opportunity to record stories for Wetherby’s community radio station, Tempo FM. This was followed in 2010 by the production of a CD of short stories called Andy in Short Shorts.

Linking up with the local open mic scene at the Spoken Word and Speaker’s Corner in York, and with Poems, Prose and Pints in Harrogate, he became more widely known for his quirky and characterful performances, taking up invitations to read in Newcastle, Harrogate, York, Wetherby and Headingley and also appearing in the Stairwell Books anthologies, Along the Iron Veins, Pressed by Unseen Feet and York .